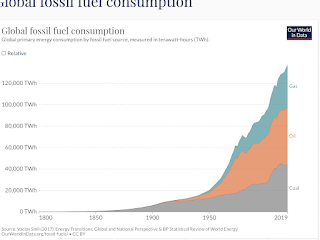 The classical example of “Entropy” which manifest itself as a waste heat and inefficiency is also an irreversible reality. Current electricity production technologies heavily depend on converting thermal energy into an electrical energy which also guarantees generation of huge amount of waste heat. It is not just the emission of greenhouse gases (GHG) and waste heat that goes along with it but also bulk of the waste heat dissipated by way of convection and radiation into the environment since the time of industrial revolution has contributed to global warming. About 59.40% of thermal energy generated so far has entered the atmosphere. For example, US consumes about 105 EJ (Exa joules) each year out of which 62EJ enters the atmosphere as a waste heat. Successfully harnessing this waste heat will be a valuable contribution in solving global warming problem. The solution for global warming and climate change lies in harnessing the available Carbon from the atmosphere and the sea but also the waste heat from the atmosphere and the sea. About 90% of heat dissipated since industrial revolution has been absorbed by the sea. Total amount of fossil fuels consumed worldwide since industrial revolution is estimated at nearly 140,000 TWH (Tera watt hours).  1 TWH is equivalent to 3.44 x 1o^12 Btu. This dissipated heat has accelerated global warming and further exacerbated by GHG (greenhouse gas) effect caused by CO2 and water vapour and triggered the change in climate worldwide. The heat dissipated and absorbed by the sea has been distributed across the globe by ocean currents. Increasing seawater salinity caused by evaporation and concentrate discharge from seawater desalination plants word wide and cooling water from thermal power plants have retained bulk of the heat and distributed across the oceans thus elevating seawater temperature. Such warming ocean in addition to warming atmosphere have contributed to melting glaciers in the poles. Oceans are acting as a sink for both heat as well as carbon thereby acidifying the seawater. The pH value has been reduced from 8.2 before industrial revolution to 8.00 at current level which may look like a big difference, but it has absorbed billions of tons of CO2 to cause the above reduction in pH value. In natural systems such as atmosphere and the oceans a slight variation will have a huge impact due it is vastness in area. Normal human body temperature is about 36.9 C but an increase of 1.5 C (101.12F) will cause hospitalisation. Natural world is very sensitive even to minor changes and that is why human activity has to be restricted and not to cause imbalance to the natural systems. In other words ”Entropy” is an integral part of the natural world and any irreversibility caused by  human beings will lead to unsustainability. For example burning fossil fuel is an irreversible chemical reaction which invariably lead to unsustainability. It is not only about the sustainability but also the economic viability that will determine the future of energy industry. It is a low efficiency technology that is currently predominant in electricity generation.The key is the maximum utilisation of thermal energy released by combustion of fossil fuel but also recycling released Carbon in a closed system using CRT (Carbon recycling technology) which can achieve zero emissions.
Posted by Clean Energy and Water Technologies at 7:33 PM