CAPZ desalination , salt production and chemical industries. Climate change will change the future of salt industries in India and elsewhere due to unseasonal monsoon rains, flooding, increasing humidity, harsh working conditions for the labour, low and unsustainable wages, increasing demand for salt world wide for de-icing of roads. The price of salt in India is as low as Rs1200/Mt ($15/Mt) but the price of salt in the international market is as much as $170/Mt. Chemical manufacturers consume almost 80% of salt produced in India but they have to use elaborate purification process in order to use them in the production of Caustic soda and soda ash. When purifying solar evaporated salt and converting to into a purified 315 gpl concentration Sodium chloride brine their cost increases substantially to as much as $ 150/Mt. The increase in cost is about 10 times the cost of raw salt. Solar salt requires a large area of land, dry weather, low humidity and strong wind and long residence time, about 8-10 months. With increasing production of Chemicals, the usage of salt has increased substantially. It has created a huge supply demand gap increasing the price of salt. But the wages of labour remain the same in spite of harsh weather conditions, exploitation of women labour have created many social issues. We in CEWT are working hard to bring about a change by introducing our CAPZ desalination technology. CAPZ desalination technology generates purified 315 gpl concentrated Sodium chloride brine directly from sea water and also generate substantial amount of fresh drinking water. The future water demand world wide requires a substantial recovery of fresh water from seawater not just 40% . CAPZ is the only desalination technology in the world that separates salt in the form of readily usable brine and drinking water simultaneously making it an important and critical technology for drinking water as well as salt and Chemical industries in the future. It offers stability to the price of salt and chemicals derived from them. For example, critical metals like Aluminium which depends on the availability of Caustic soda cannot fix their price because of uncertainty and fluctuating price of salt and Caustic soda. Chemical industries are one of the most polluting industries in the world that generates hundreds of thousand of solid toxic wastes all over the world and such wastes are invariably dumped into the sea severely damaging the marine life and creating ecological problems. It is time Chemical industries adopt CAPZ desalination technology for a sustainable future! Thanks "The Hindu " for the following you tube video that highlights the problems faced by salt industry in India. How climate change is making salt farming unsustainable How climate change is making salt farming unsustainable youtube.com likecelebrate 6
Posted by Clean Energy and Water Technologies at 4:34 PM 1 comment:

Why Carbon Recycling Technology (CRT) is the best option to decarbonise the planet? 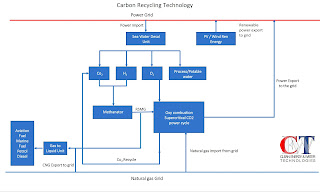 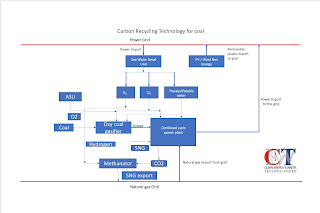 There is no way CO2 can be hidden. It is the fundamental truth. World is trying to decarbonise for nearly 27 years since Kyoto protocol without success The CO2 level is now more than 50% above pre-industrial level. It is because no realistic steps were taken to decarbonise the fossil economy because the fossil lobby is in the forefront offering solutions such as CCS and CCUS by inventing various shades of Hydrogen such as blue, grey, black and pink! because Hydrogen is already widely used in oil and gas industries, and it is easier for them to use Hydrogen in the energy mix. But it emits significant amount of CO2 into the atmosphere. The word ‘Carbon capture’ guarantees the ’continuous emissions of CO2 and utility of fossil fuels’ whether such captured Carbon will be buried deep underground or converted into any other product. Even when converted into an industrial product one cannot remove the Carbon backbone and will continue to emit CO2 in various forms at various applications. For example, Methanol can be synthesised using CO2 emission and Hydrogen. But Methanol on combustion will release CO2 back into the atmosphere. Injecting CO2 into aquifers will cause further acidification of the ocean damaging coral reefs and marine species. Injection of CO2 into existing oil wells to enhance ‘oil recovery’ is in fact an indirect method of Carbon recycling. Renewable energy is certainly one option, but it will not be enough to meet the growing demand of the world. Battery is an energy storage device. It is useful in its traditional ways, where there is a stop gap arrangement to store energy temporarily, especially with intermittent renewable energy sources. But it cannot be an energy solution no matter how sophisticated the technology is. World needs an uninterrupted continues and clean electricity (24 x 7) with absolutely no emissions including Oxides of Carbon, Nitrogen, Sulphur and Hydrogen. Many companies are betting on Hydrogen as an alternative to fossil fuel. But Hydrogen is an energy carrier and cannot be a fuel itself; but it is very useful to decarbonise the CO2 emissions by converting CO2 into a hydrocarbon and recycling it internally within the system. Governments should offer subsidy to Carbon negative fuels because it is the only way CO2 level in the atmosphere can be stabilised. If Governments around the world fail to act now then ‘Mother Nature’ will act with catastrophic consequences such as heavy snow, bushfires, floods, draughts, pandemics and wars. Many scientists now started believing pandemic may be a direct cause of global warming and climate change. Let us hope this may not be the case.
Posted by Clean Energy and Water Technologies at 11:03 PM No comments: