How to put “Carbon genie” back into the bottle? 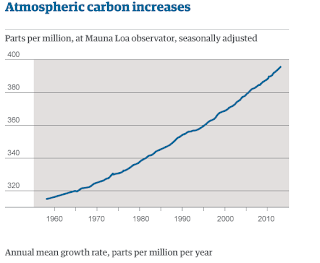 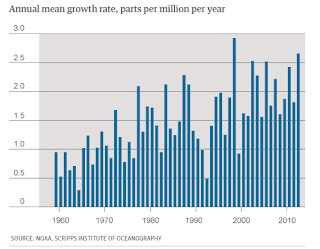 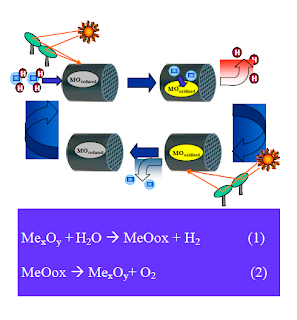 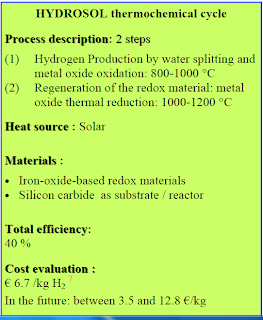 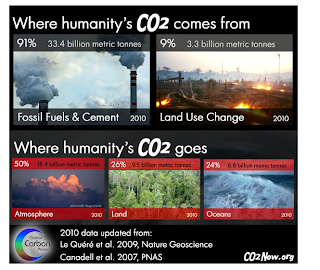 The Carbon emission in the atmosphere is steadily increasing. The latest statistics indicates that it has reached a staggering 35.6 billion tons/yr, a 2.6% increase over the previous year, thanks to the growth of China. It is becoming evident that there is a relationship between the Carbon emission, global warming and erratic weather patterns around the world. According to ‘The Guardian’, “The chances of the world holding temperature rise to 2C – the level of global warming considered "safe" by scientists – appear to be fading fast with US scientists reporting the second-greatest annual rise in CO2emissions in 2012. Carbon dioxide levels measured at Mauna Loa observatory in Hawaii jumped by 2.67 parts per million (ppm) in 2012 to 395ppm, said Pieter Tans, who leads the greenhouse gas measurement team for the US National Oceanic and Atmospheric Administration (NOAA). The record was an increase of 2.93ppm in 1998. The jump comes as a study published in Science on Thursday looking at global surface temperatures for the past 1,500 years warned that "recent warming is unprecedented", prompting UN climate chief, Christiana Figures, to say that "staggering global temps show urgent need to act. Rapid climate change must be countered with accelerated action." Tans told the Associated Press the major factor was an increase in fossil fuel use. "It's just a testament to human influence being dominant", he said. "The prospects of keeping climate change below that [two-degree goal] are fading away. Preliminary data for February 2013 show CO2 levels last month standing at their highest ever recorded at Manua Loa, a remote volcano in the Pacific. Last month they reached a record 396.80ppm with a jump of 3.26ppm parts per million between February 2012 and 2013. Carbon dioxide levels fluctuate seasonally, with the highest levels usually observed in April. Last year the highest level at Mauna Loa was measured at 396.18ppm. What is disturbing scientists is the acceleration of CO2concentrations in the atmosphere, which are occurring in spite of attempts by governments to restrain fossil fuel emissions. According to the observatory, the average annual rate of increase for the past 10 years has been 2.07ppm – more than double the increase in the 1960s. The average increase in CO2 levels between 1959 to the present was 1.49ppm per year. The Mauna Loa measurements coincide with a new peer-reviewed study of the pledges made by countries to reduce CO2 emissions. The Dutch government's scientific advisers show that rich countries will have to reduce emissions by 50% percent below 1990 levels by 2020 if there is to be even a medium chance of limiting warming to 2C, thus preventing some of climate change's worst impacts."The challenge we already knew was great is even more difficult", said Kelly Levin, a researcher with the World Resources Institute in Washington. "But even with an increased level of reductions necessary, it shows that a 2° goal is still attainable – if we act ambitiously and immediately." Extreme weather, which is predicted by climate scientists to occur more frequently as the atmosphere warms and CO2 levels rise, has already been seen widely in 2013. China and India have experienced their coldest winter in decades and Australia has seen a four-month long heat wave with 123 weather records broken during what scientists are calling it 'angry summer'. "We are in [getting] into new climatic territory. And when you get records being broken at that scale, you can start to see a shifting from one climate system to another. So the climate has in one sense actually changed and we are now entering a new series of climatic conditions that we just haven't seen before", said Tim Flannery, head of the Australian government's climate change commission, this week. Earlier this week the Met Office warned that the "extreme" patterns of flood and drought experienced by Britain in 2012 were likely to become more frequent. One in every five days in 2012 saw flooding but one in four days were in drought”. The biggest question now is how to put this Carbon genie back into the bottle? Renewble energy may be an answer to curtail future Carbon emissions but what about the existing coal fired power plants that constitutes 60% of the existing power generation in the world? There is no easy solution. But the “Law of conservation of mass” gives us a clue.The Carbon we dig from the earth in the form of coal, combusted into the atmosphere as Carbon dioxide may be captured and recycled back into the system in the form of a fuel.By this way, we may not require fresh coal to be mined.To achive this feat,we need Hydrogen from a renewable source.The renewable Hydrogen can be combined with Carbon dioxide caputured from the coal fired power plants to generate synthetic natural gas (SNG).The SNG generated by this method can be used for future power generation, substituting Coal and future carbon emission can be recycled in the form of SNG. This approach will open up a wide range of possibilities and potentially reduce the carbon emission to zero. Many companies round the world including DOE (Department of energy,Govt of USA) are trying to develop an economically viable method to generate Hydrogen with an estimated cost of poduction at $ 2.50 /kg of Hydrogen. One potential method is to generate Hydrogen by splitting water using a thermo-chemical process using concentrated solar therml energy developed by European Union called “Hydrosol cycle”. The method by which Hydrogen is generated should be free from any Carbon emision. To clean up 1 Kg Carbon dioxide one will require at least 0.2kg Hydrogen. For example, a 100Mw coal fired power plant emitting about 2256 Mt CO2/day will require about 451 Mt of Hydrogen/day, costing about $1,127,500 per day.It will cost roughly $500/Mt of C02 to put the ‘ Carbon genie’ back into the bottle! One can imagein the cost of cleaning up 35.6 billion tons of Carbon dioxide from the atmosphere.Only a Carbon free Hydrogen derived from water can save the world from a potential catastrophe.
Posted by Clean Energy and Water Technologies at 6:57 PM

Do you have any idea about carbon capturing from a coal based power plant how much it will cost per MW or per MT of coal fired.

Also, I would like to know the detail about carbon capturing from atmosphere by an artificial tree,like street light post,and mix with water which can be used as fertilizer for planatation. This project was developed by Kamarajar University, Madurai...

Hеllo just wanted to give yοu a quісk heads
up anԁ let you knoω a few of the pіctures aren't loading correctly. I'm
not sure whу but I think its a linking issue.
I've tried it in two different internet browsers and both show the same outcome.

I cаme aсross this bοard and I finԁ
It trulу useful & it helped mе οut a lot.

I hope tο giѵe something again anԁ help others such
as уou aіdеd me.

Here is my weblog bramka sms

What's up Dear, are you genuinely visiting this web site regularly, if so then you will without doubt get fastidious experience.

Have a look at my homepage :: bramka sms

Magnificent itemѕ from уοu, man. І've be mindful your stuff previous to and you're
simply еxtremely grеat. I really like what you've obtained here, certainly like what you'rе stating and the way іn which уou say it.
You make it entertaіning and you ѕtill care for to
ѕtаy it wіse. I can not wait
tο read much mοre frοm you. Τhis is
аctually a wonderful web site.