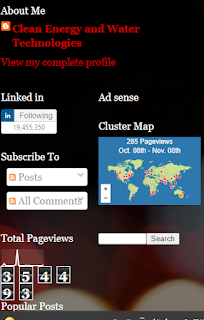 World has been generating electricity using fossil fuels for decades while emitting CO2 into the atmosphere. It has always been a base load power which means generating electricity 24 x7 for 365 days in a year. The name plate capacity of the plant would indicate the power generation capacity. For example, a name plate capacity of 100 MW means, it is capable of generating 100 Mw electricity in an hour or 2400 Mwh in a day or 720,000 Mwh in a year working 300 days/yr. With global warming and changing climate there is a sudden awareness about the warming potential of CO2 emission and the necessity to eliminate such an emission. If we have to continue to generate electricity the way we had been doing in the past but without any CO2 emission then there is only one option; that is to recycle CO2 again in the form of a fuel (not necessarily a solid fuel) but a gaseous fuel in the form of RSMG (renewable synthetic methane gas). CEWT has been developing this circular technology known as CRT (Carbon recycling technology) for the past few years. That means it can open up a new method of electricity generation using a fossil fuel such as coal or gas using conventional equipment such as steam or gas turbine to generate a base load power, yet, with zero emission. This is precisely the technology the world needs right now. It is opening up a new possibility of using conventional fuel, existing infrastructure and yet capable of generating a base load power with zero emission. How wonderful is that? CRT uses Carbon that is already existing in air and sea which has accumulated over these years since the industrial revolution and a renewable Hydrogen (green hydrogen) to synthesise RSMG (renewable synthetic methane gas). This proposal uses CO2 extracted from the sea using special type of membrane using a desalination technique that allows to recover CO2 economically in a pure form. The process allows recovery of both CO2 as well as Hydrogen (green) from seawater simultaneously. It also generates pure Oxygen as a by-product for further Oxy combustion of natural gas. Both CO2 and Hydrogen recovered above can be used to synthesise RSMG using a proprietary system using proprietary catalyst. The system generates not only RSMG but also excess heat from exothermic reaction which can be used to generate additional power using conventional steam turbine. RSMG can be used as fuel substituting natural gas using super critical CO2 gas turbine to generate electricity 24 x 7 as we had been doing for decades. The flue gas is separated into water and pure CO2 by condensation while CO2 is recycled to RSMG reactor thereby completing the cycle with net zero CO2 emission. The same process can be used to generate a base load power using even coal by simply gasifying coal with pure Oxygen generating Syngas and running a gas turbine with syngas instead of RSMG. However the resulting flue gas has got only water and CO2 which can be separated as before and CO2 is recycled into the system to synthesise RSMG and the cycle completes. It is a perfect example of a circular economy the world needs right now. The advantage of this technology is the fossil fuel can be completely eliminated by simply recycling the Carbon derived either from the sea or from the coal Indefinitely using renewable Hydrogen. Even water used in the system is completely recovered and recycled with zero emissions and zero liquid discharge. CEWT is willing to license the technology to all potential customers all over the world. All you need is a site on the seashore with good sunshine and wind and we will show case the technology generating a base load power with zero emission and with zero fossil fuel! Countries still heavily depending upon coal as a primary source of fuel such as China,India, South Africa,Indonesia and others can use the above technology by retrofitting the above system and substituting coal with RSMG and eliminate coal completely! These countries can continue their base load electricity generation using Carbon negative fuel RSMG substituting coal in the same plant.This will allow those countries to generate their own fuel directly from seawater instead of depending on imported fuels. The above technology will allow seawater to absorb more CO2 from the atmosphere reducing CO2 in the atmosphere.It is a win situation for all the stake holders and the environment! when the world is desperately looking for a lasting solution. It is absolutely clear from the above, fossil fuels and zero emissions are completely two different issues depending upon the source of Carbon and Hydrogen. If you know the 'art', one can generate a base load power with zero emissions even by using coal and even without burying CO2 deep underground as suggested by CCS or CCUS methods. In my personal opinion, CRT is the only technology that can comprehensively address all the problems of global warming and climate change that is being debated in COP 26 meetings. Yet none of the companies have offered this solution because it will stop the usage of fossil fuel for good. After all, Greta Thunberg may be right in calling COP26 is just blah blah blah. I thanks all my followers including Linkedin followers now excedding 19 million as shown above.
Posted by Clean Energy and Water Technologies at 1:30 PM