Carbon is to return to Carbon

Carbon emission is a matter of great concern to all the countries around the world due to the global warming and climate change. After the Paris talks many countries are genuinely trying to reduce their emissions either by switching over to renewable energy or cutting down their emissions by reducing their Carbon footprint. In their desperate measure to reduce Carbon emissions some countries like Canada are trying to accelerate carbon emission reduction by promoting innovation technologies with millions of dollars of grant money. Recent fires in the state of Alberta, rich in oil sand deposits have opened the eyes of the world to witness how a disaster can unfold so quickly and thousands of people to be evacuated in a short notice. Many fled their homes leaving behind their valuables and memories. It was one of the worst fire disasters in recent memory. Canada especially the state of Alberta is now all the more determined to avert such incidents in the future but also equally determined to reduce their Carbon emissions. The fire is due to dry conditions due to global warming and accelerated by oil sands. It is a perfect recipe for a disaster. Many countries have switched over from coal to natural gas as a cleaner fuel to reduce their Carbon emission. Natural gas emits less CO2 compared to coal. But does it help combat global warming? One has to compare the two different fuels and their combustion by the following reactions: C + O2 ----> CO2 and CH4 + 2O2 -------> CO2 + 2H2O Combustion of coal requires less Oxygen (air) when compared to combustion of natural gas which requires twice the volume of Oxygen (air). Coal combustion emits oxides of Nitrogen and Sulphur apart from CO2 and a minor quantity of water vapour and particulate matters. Combustion of natural gas releases twice the volume of water vapour apart from oxides of Nitrogen and sulphur. Recent findings by NASA confirms that water vapour is the major greenhouse gas apart from CO2 that is responsible for warming globe and the climate change. Therefore, natural gas does not help combating global warming and climate change. The following excerpts from NASA highlights this fact: Water Vapour Confirmed as Major Player in Climate Change Credit: NASA The distribution of atmospheric water vapour, a significant greenhouse gas, varies across the globe. During the summer and fall of 2005, this visualization shows that most vapour collects at tropical latitudes, particularly over south Asia, where monsoon thunderstorms swept the gas some 2 miles above the land. Water vapour is known to be Earth’s most abundant greenhouse gas, but the extent of its contribution to global warming has been debated. Using recent NASA satellite data, researchers have estimated more precisely than ever the heat-trapping effect of water in the air, validating the role of the gas as a critical component of climate change. Andrew Dressler and colleagues from Texas A&M University in College Station confirmed that the heat-amplifying effect of water vapour is potent enough to double the climate warming caused by increased levels of carbon dioxide in the atmosphere. With new observations, the scientists confirmed experimentally what existing climate models had anticipated theoretically. The research team used novel data from the Atmospheric Infrared Sounder (AIRS) on NASA’s Aqua satellite to measure precisely the humidity throughout the lowest 10 miles of the atmosphere. That information was combined with global observations of shifts in temperature, allowing researchers to build a comprehensive picture of the interplay between water vapour, carbon dioxide, and other atmosphere-warming gases. The NASA-funded research was published recently in the American Geophysical Union's Geophysical Research Letters. AIRS is the first instrument to distinguish differences in the amount of water vapour at all altitudes within the troposphere. Using data from AIRS, the team observed how atmospheric water vapour reacted to shifts in surface temperatures between 2003 and 2008. By determining how humidity changed with surface temperature, the team could compute the average global strength of the water vapour feedback. “This new data set shows that as surface temperature increases, so does atmospheric humidity,” Dressler said. “Dumping greenhouse gases into the atmosphere makes the atmosphere more humid. And since water vapour is itself a greenhouse gas, the increase in humidity amplifies the warming from carbon dioxide." Specifically, the team found that if Earth warms 1.8 degrees Fahrenheit, the associated increase in water vapour will trap an extra 2 Watts of energy per square meter (about 11 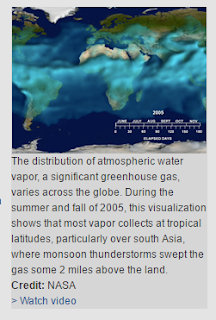 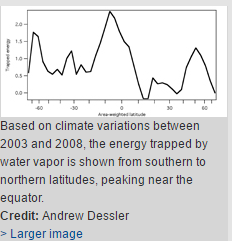 square feet) "That number may not sound like much, but add up all of that energy over the entire Earth surface and you find that water vapour is trapping a lot of energy," Dressler said. "We now think the water vapour feedback is extraordinarily strong, capable of doubling the warming due to carbon dioxide alone." Because the new precise observations agree with existing assessments of water vapour’s impact, researchers are more confident than ever in model predictions that Earth's leading greenhouse gas will contribute to a temperature rise of a few degrees by the end of the century. The amount water vapour released by burning natural gas is twice the volume of natural gas burnt. A plant using 10,000 m3/day natural gas can release 20,000m3/day water vapour that can be recovered. In fact, if the Gulf countries can recover water from exhaust of their gas fired power plants they may not require any water by desalination of seawater at all. Current consumption of natural gas world-wide exceeds 3.5 trillion cubic meters which roughly translates to 7 trillion cubic meters of water vapour into the atmosphere. Such a large volume has a potential to change our climate system.What goes up as water vapour has to condense into water and come down.It has a potential to flood many parts of the world and we are already witnessing flash flooding more frequently.The economic loss by such natural disasters may run into several hundreds of billion dollars in future.It is absoluetly critical that human induced emissions are curtailed with great urgency. It is interesting to examine how the state of Alberta is trying to reduce their carbon emissions by promoting innovative technologies. Majority of the proposals are supposed to convert CO2 emissions into “a useful product” so that the emission can be curtailed or reduced. A quick glance on the list of the proposals they have funded so far indicates they will convert CO2 into an industrial chemical such as Methanol or a Fertilizer such as Urea or alkaline chemicals such as bicarbonates and calcium carbonates etc. Can they really solve the problem of carbon emissions by turning them into useful products? The answer is most likely no. It will help capture CO2 at Alberta but it will be released somewhere else where the end products are used. It will simply shift the problems of Carbon emission from Alberta into some other region of the world. For example, Urea synthesised from captured CO2 will again be released into the atmosphere when Urea is used by farmers. An enzyme in the soil will release the CO2 from Urea into the atmosphere. The only real solution is to convert captured CO2 back into a fuel such as SNG (synthetic natural gas) so that it can be recycled into the power plant. By this way the CO2 emission will be converted into solid Carbon. One need not bury CO2 under the ground or emit it into the atmosphere but constantly recycle into SNG so that power plant can generate power continuously without emitting any greenhouse emissions. To do this we need Hydrogen. At present Hydrogen is produced commercially from natural gas but with carbon emission. Other methods of producing Hydrogen without carbon emissions are expensive. But Hydrogen can be generated from natural gas without Carbon emission and it can be used to convert captured CO2 from power plants into SNG. In other words, two greenhouse gases namely CO2 and methane (CH4) will be reacted to generate commercially valuable Carbon nanotube as a main product as shown below. This high temperature reaction can generate superheated steam that can generate power while a valuable solid Carbon is regenerated. Such a process is still in a developmental stage but has a potential to become a commercial reality in the near future. CH4 + CO2 ------------> 2C + 2 H2O In fact, the carbon emission is converted back into a solid Carbon. The Carbon is to return to Carbon to avoid GHG emission (CO2, N2O, NO2 and H2O) that is changing our climate.
Posted by Clean Energy and Water Technologies at 5:20 PM