Coal is still the dominant fuel used for power generation due to its low cost and abundant availability despite its emission problems and global warming issues. Companies around the world are trying to improve the efficiency of coal fired power plants and reduce emissions by various methods. The idea is to prepare an ultra clean coal with very low ash content in the form of coal-water slurry that can be directly injected into a diesel engine. Direct firing of coal requires micronising to less than 20-30 microns for diesel engine and less than 10 microns for turbines and producing a coal water slurry with at least 50% w/w coal content. The thermal and combustion efficiency of coal water fuel seems to be matching to that diesel engine at up to 1900rpm according to literatures. Still more research is required on engine modification and engine nozzle to handle coal water slurry because of its abrasive nature. If coal can be converted into a fluid like a diesel or Fuel oil then it can substitute diesel at reduced cost. However the Carbon problem needs to be addressed by ongoing research on sequestration. Nanotechnology is an emerging field that offers hope to produce Colloidal coal water fuel that resembles fuel oil that may be suitable for direct injection into diesel engine with little modifications. The colloidal suspensions of coal in water (CCW) are produced using a proprietary wet-combination device. These suspensions are a new material with new properties. “First, the colloidal fraction plus water is a pseudo fluid good for transport, handling and suspension of large particles. Second, the surface area per unit volume of coal available for chemical reaction and burning is greatly increased and finally, CCW may be milled with a third fluid, seeding the mixture with submicron coal. The colloidal nature of the majority of particles provides for very good features such as outstanding long-term stability, in contrast to regular coal water slurries (CWS) which rapidly sediment under storage. Moreover, the very small particles create an increased reactivity to combustion because small particles with large surface area react faster than large particles with the same volume.” A company based in Panama has conducted experiments using colloidal coal water fuel and published the following information. CCW suspension preparation and properties Characterization “The colloidal dispersions are prepared in two stages: first by a bench mill and then by our wet- comminuting device. The bench mill was manufactured by IKA®- Group. After grinding, samples were sieved using mesh size sieves 40 (400 μm), 70 (212 μm) or 140- (106 μm) and the passing particles were retained and used to prepare coal suspensions with various water contents (30 to 50 %), surfactants and other type of additives. These mesh sizes are not foreign to coal fired power plants. It is noteworthy that a preliminary formulation study is first necessary in order to determine the type and concentration of additives that are best suited to improve coal particle wetting and reduce viscosity. The additives were mostly surfactants and viscosity controlling agents and every type of coal tested usually required a specific formulation. In general, it was found that nonionic surfactants were good wetting agents, in concentrations varying from 0.1 to 0.6 w/w %. Some of the additives used to reduce viscosity by decreasing particle interactions, before or after the wet comminuting process, were amines. The suspension formulation previous to the wet-comminuting instance was very simple since what was basically required was a good wetting agent or a combination of two wetting agents. The idea was to have a uniform mixture with as low viscosity as possible. Particle size of coal samples was determined by direct observation in an optical microscope, or by sieving using five or six different sieves ranging from 20 to 400 μm, or using a laser diffraction apparatus made by Microtrac Corporation, Nanotrac model, having a measurement range from 8 nm to 6.5 μm. Neither of these methods was sufficient to obtain a complete characterization of the particle size distributions, but a combination of the three allowed for a good assessment of what really was in the suspension, before and after the wet-comminuting process. In our study, the percentage of mass passing the 635 mesh size sieve (< 20 μm) was used as an indicator of wet-comminuting process efficiency (generation of colloidal particles), given that microscopic observations generally showed that particles between 8 to 20 μm were very scarce. The preparation of the colloidal suspension of coal was centered in a technology that is totally based on fluid mechanics principles. As mentioned above, a preliminary suspension was prepared in a tank with low agitation and the appropriate water and surfactant contents. This suspension is then fed into a device that spins a film of the fluid to the walls of a cylindrical vessel at very high speed and under cavitations free conditions. The resulting flow field induces a “particle trap” region where coal particles are locally concentrated above their nominal value and under very high shear. Particles are then milled to very small sizes by a wet-comminuting mechanism. Friction heating is controlled by a chilled water jacket around the vessel. 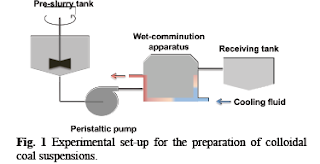 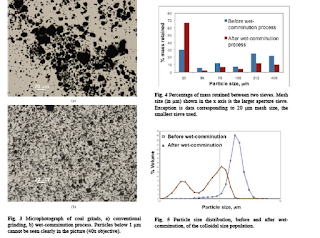 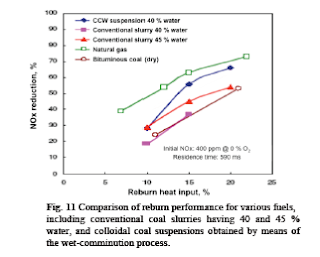 A schematic view of the set up is shown in the attached figure. The energy consumed by the wet-comminuting device was evaluated by monitoring the power (voltage and amperage) during the process. The latter has two components, the power required to drive the motor shaft and mechanical seal, and the net power consumed by the fluid during comminuting. It was found that the net power divided by the mass flow rate, in terms of kWH/ton depended on coal content and viscosity of the preliminary slurry, exhibiting values of 30 to 80 kWh/ton. The energy consumed by the motor shaft and seal would account for 50 to 80 % of the total power consumed. Using the method described above, 100 gallons of CCW were prepared, using an Eastern bituminous coal that was previously grinded to 200 mesh. Several properties of this sample were characterized.” Colloidal coal water fuel has certain distinct advantages over conventional coal water slurry for power generation using conventional diesel engine and turbines. Further research and development work is needed before it can be expanded for large scale production. But it offers a hope to improve the efficiency of existing coal fired power plants and reduces emissions.
Posted by Clean Energy and Water Technologies at 2:28 PM 10 comments: