Recent news from USA has got the attention of many people around the world. “Scientists with the United States Navy say they have successfully developed a way to convert seawater into jet fuel, calling it a potentially revolutionary advancement. Researchers at the Naval Research Laboratory (NRL) developed technology to extract carbon dioxide from seawater while simultaneously producing hydrogen, and then converted the gasses into hydrocarbon liquid fuel. The system could potentially shave hours off the at-sea refueling process and eliminate time spent away from missions.” They estimate the cost of the jet fuel will be anywhere between $3 and $6 per gallon. It may not be able to compete with traditional petroleum sources due to high energy requirement. However, the main attraction of this process is to extract Carbon dioxide absorbed by the ocean to avoid acidification and to mitigate climate change while making petrol as a Carbon neutral fuel. Ocean has become a rich source of Carbon (Carbon sink) absorbing excess atmospheric Carbon dioxide caused by human beings. Generating Carbon neutral fuel such as SNG (synthetic natural gas), diesel and petrol from air and sea water will be the fastest way to reduce Carbon from the atmosphere. Probably Governments, business and industries will embarrass this concept much quicker than any other mitigating methods simply because it is a revenue generating proposition with a potential to earn carbon credit. Carbon-neutral fuel is a synthetic fuel (including methane, gasoline, diesel fuel, jet fuel or ammonia) that is produced using carbon dioxide recycled from power plant flue exhaust gas or derived from carbonic acid in seawater and renewable Hydrogen. Such fuels are potentially carbon-neutral because they do not result in a net increase in atmospheric greenhouse gases. It is a Carbon capture and recycling (CCR) process. “To the extent that carbon-neutral fuels displace fossil fuels, or if they are produced from waste carbon or seawater carbonic acid, and their combustion is subject to carbon capture at the flue or exhaust pipe, they result in negative carbon dioxide emission and net carbon dioxide removal from the atmosphere, and thus constitute a form of greenhouse gas remediation. Such power to gas carbon-neutral and carbon-negative fuels can be produced by the electrolysis of water to make hydrogen used in the Sabatier reaction to produce methane which may then be stored to be burned later in power plants as synthetic natural gas, transported by pipeline, truck, or tanker ship, or be used in gas to liquids processes such as the Fischer–Tropsch (FT) process to make traditional fuels for transportation or heating. Carbon-neutral fuels are used in Germany and Iceland for distributed storage of renewable energy, minimizing problems of wind and solar intermittency, and enabling transmission of wind, water, and solar power through existing natural gas pipelines. Such renewable fuels could alleviate the costs and dependency issues of imported fossil fuels without requiring either electrification of the vehicle fleet or conversion to hydrogen or other fuels, enabling continued compatible and affordable vehicles. A 250 kilowatt synthetic methane plant has been built in Germany and it is being scaled up to 10 megawatts.” (Wikipedia). We have been writing about renewable hydrogen (RH) for the past couple of years and often use the phrase, “Water and energy are two sides of the same coin” because we can mitigate climate change using renewable hydrogen (RH) even while the fossil fuel economy can carry on as usual. By generating Carbon neutral fuels using excess Carbon from air and sea and hydrogen from water (even seawater) using renewable energy sources, the problem of global warming and climate change can be solved because we will not be adding any further Carbon into the atmosphere than what it is today! Instead of generating solar and wind power and storing them in batteries it will be prudent to generate Carbon neutral fuel from CO2 already available in the system and use them as usual. Meanwhile Hydrogen based power generation and transportation can be developed as a long term solution. Fossil- fuel fired power plants produce CO2 (Carbon dioxide) which could be captured and converted to CO (Carbon monoxide) for production of synthetic fuels. CO2 can be converted to CO by the Reverse Water Gas Shift Reaction, CO2 + H2--> CO + H2O. CO could then be used in the F-T reaction with additional hydrogen from water-splitting to produce synthetic fuel such as diesel and petrol as carbon neutral fuels. Synthetic fuel by CO2 Capture + H2 from Water-splitting: Reverse Water Gas Shift CO2 + H2 ----> CO + H2O F-T reaction CO + 2H2 ----> CH2 + H2O Water-splitting 3H2O + Energy --> 3H2 + 3/2O2 Net reaction CO2 + H2O + Energy ---> CH2 + 3/2O2 In this case, no coal is needed at all, and CO2 is consumed rather than produced. The excess O2 (oxygen) would be used in the fossil power plant that provides the CO2, simplifying CO2 capture. There is currently considerable effort underway on developing CO2 capture systems for new and extant power plants. The increasing concern with Global Climate Change suggests that there is a reasonable likelihood of such plants operating in the timeframe associated with synthetic fuel from carbon dioxide. Such a synergistic system has the potential to significantly reduce our current emissions of CO2 since the carbon in the coal is used once for power production and then again for liquid hydrocarbon fuel synthesis. Synthetic fuel plant with capacities as low as 1000 barrels/day are commercially feasible using specially designed micro-reactors as shown in the attached photograph.(Ref:velocys system). Utilizing carbon dioxide from sea and air is the smartest way to mitigate climate change while maintaining fossil fuel based power plants and automobiles without any change or modifications. The same technique can also be applied for biomass gasification plants. 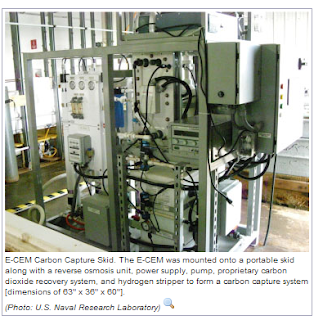 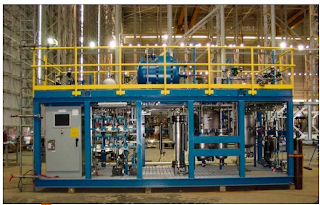 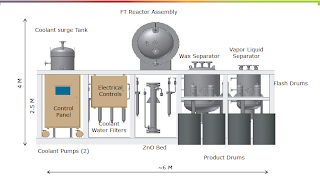 Posted by Clean Energy and Water Technologies at 3:49 PM No comments: