Global warming - a race against time

Governments and industries seek comfort from the fact that Global Warming is not directly linked with greenhouse gas emissions and there is no concrete scientific proof yet linking these two, and think they can carry on the business as usual. Few scientists in the scientific communities also have backed such sentiments. Alternative technologies such as renewable energy technologies are expensive and cannot compete with fossil fuel based power plants in near terms. Advanced renewable technologies require rare earth materials such as Lanthanum, cerium, praseodymium, neodymium, cobalt and lithium that are used in electric vehicle batteries; Neodymium, praseodymium and dysprosium that are used in magnets for electric vehicles and wind turbines. Lanthanum, cerium, europium, terbium and yttrium that are used in Phosphors for energy-efficient lighting; Indium, gallium and tellurium that are used in solar cells. The supply of these materials are limited or confined to few countries such as China. These new material also require additional energy to mine, process and extract such rare earth materials using only fossil fuel generated power. Transport vehicles such as Hybrid or Electrical cars require substantial amount of rare earth material such as Lithium for Battery production. The cost of Lithium batteries according to Centre for Transportation, Argonne National Laboratory is: High energy 35 kwh battery costs $706/kwh or $ 24,723. High Power battery 100 10A-h cell costs $2,486. The cost and maintenance of such vehicles are expensive compared to gasoline cars. The looming financial crisis, unemployment and political instability in many parts of the world have overshadowed the problem of greenhouse house and global warming. Governments in power are trying to postpone the issue of global warming as long as possible because they are unpopular among their public, who are increasingly wary of high energy cost and their household budgets. Industrialized countries such as US, China, India and Australia have projected their production and utilization of their coal, oil and gas usage in the future, which are steadily on the rise. Australia’s mining and resources industries are booming with increasing production of Coal, Coal seam Methane gas, LNG, Iron ore, Copper, Nickel and Gold. Increasing demand by growing economies such as India and China have propelled the production of coal and LNG and other minerals in Australia. The booming mining and shipping industries of Australia have prompted UNESCO to warn Australia about the impending danger of ‘Great Barrier reef’ being destroyed by its busy shipping activities. The Great Barrier Reef is the world's largest coral reef ecosystem. The only living organic collective visible from space, it is considered one of the seven natural wonders of the world, and is a World Heritage listed area. It boosts the Queensland’s image of sun, swimming and tropical islands, and around 2 million people visit the reef every year, generating more than $2 billion in direct tourism revenue in the area. The mining boom brings revenue but it also brings natural disasters and destruction of its natural wonders. The net effect will be destruction of Nature and displacement of people at the cost of mining revenue. But how long such a boom will last, and if the economies of China and India starts slowing down then, what happens to all the investments and the damage caused? The above developments paint a grim picture on global warming. The world has witnessed natural disasters causing huge human and financial losses. The natural disasters have costed an economic loss of nearly 13 to 30 billion dollars in the past two years in Australia alone. Yet, people and Governments want a ‘concrete proof’ that man made greenhouse gases cause global warming and trigger natural disasters. Well, we can carry on such conversation indefinitely till we reach a point of no return. “Wisdom comes from experience; but experience comes from foolishness”. 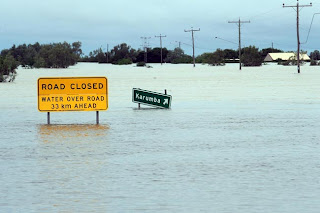 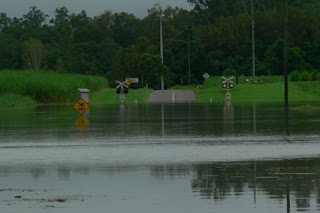 Posted by Clean Energy and Water Technologies at 11:06 PM