PV solar is expanding as a potential renewable energy source for individual houses, and the cost of solar panels are slowly coming down as the volume of production increases. However, the intermittent nature of solar energy is still an issue, especially for off grid and remote locations. Now solar energy is stored using lead acid batteries for such applications and inverters become part of the system. The capacity of the battery bank is designed to meet the electrical demand and to absorb the fluctuation of the energy generated by solar panels and it varies from location to location. This method stores the electrical energy generated by PV solar in the form of DC current and delivers it in the form of AC current. Though this method is the simplest one for remote locations, storing solar power in the form of Hydrogen is more economical and environmentally friendly in the long run. Solar energy can directly be used to generate Hydrogen using solid polymer electrolyzers and stored in cyclinders.The stored Hydrogen can then be used to fuel a stationary Fuel cell to generate power onsite. One can design a system by integrating various components in such a way; the Hydrogen generated by solar energy is used to generate power on site as and when required. By this method one can generate required power throughout the day 24x7 irrespective of the availability of sun. The system integration involves various components supplied by various manufacturers with various specifications and the success of a system depends on the careful design using data acquired over a period of time on a specific location. Many winds to Hydrogen projects also have been tested in locations around the world.NREL (National renewable energy laboratory, USA) has conducted number of tests by integrating various components such as PV solar and wind turbines with Electrolyzers (both PEM electroylzers and alkaline electrolyzers) and Hydrogen IC engines for remote power generation as well as for fuelling vehicles with Hydrogen. Though the cost of this system is still expensive, such integration offers enormous potential as a clean energy source for remote locations without any grid power. When one takes into account the fluctuating oil prices, cost of global warming, cost of power transmissions and losses during long distance power transmission from fossil fuel power plants, Renewable Hydrogen offers the best and sustainable alternative to fossil fuels. Such a system offers complete independence, energy security, reliability and fixed power tariff. System integration of renewable energy sources for Hydrogen production and onsite power generation using Fuel cell or Hydrogen engine is the key to a successful deployment of solar and wind energy for rural electrification and to remote islands. Such system will offer greater return on investment even to supply power to the grid based on power purchase agreements with Government and private companies. Renewable Hydrogen is the only viable solution for clean power of the future and sooner we embrace this integrated solution better for a cleaner future. Government and private companies investing on oil and gas explorations can focus their attention in developing renewable Hydrogen based solutions so that the cost of Hydrogen can become competitive to fossil fuel. Once the cost of Hydrogen reaches parity with cost of fossil fuel then, it will set the beginning of a green revolution in clean energy. 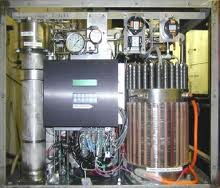 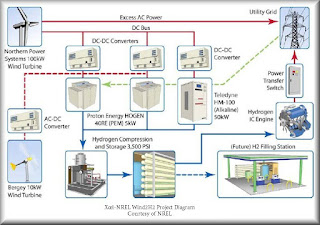 Posted by Clean Energy and Water Technologies at 5:14 PM