We acknowledge that solar energy is a potential renewable energy source of the future. The total energy requirement of the world is projected in the next 40 years to be 30 TW (terra watts) and only solar energy has a potential to meet the above demand. However, harnessing sun’s energy to its fullest potential is still a long way to go. Concentrated solar power (CSP) offers a greater hope to fill this gap. The main reason is the cost advantage of CSP compared to PV solar and energy storage technologies and their costs. The cost of PV solar has steadily decreased in the past few years. Though the cost of solar cell has come down to $0.75 per watt, the overall cost of the PV system is still around $ 3.00 per watt. This is due to the cost of encapsulation; interconnect wiring, mounting of panels, inverters and battery bank. The overall cost of the system will not come down drastically beyond a point. This makes PV solar still more expensive compared to conventional power generation using fossil fuels. People can understand the value of renewable energy and impending dangers of global warming due to greenhouse gases, but the ultimate cost of energy will determine the future of energy sources. In PV solar the sun’s light energy is directly converted into Electricity, but storing such energy using batteries have certain limitations. PV solar is suitable for small scale operations but it may not be cost effective for large scale base load power generation. The best option will be to harness the suns thermal energy and store them and use them to generate power using the conventional and established methods such as steam or gas turbines. Once we generate thermal energy of required capacity then we have number of technologies to harness them into useful forms. As we mentioned earlier, the thermal energy can trigger a chemical reaction such as formation of Ammonia by reaction between Hydrogen and Nitrogen under pressure, which will release a large amount of thermal energy by exothermic reaction. Such heat can be used to generate steam to run a stem turbine to generate power. The resulting ammonia can be split with concentrated solar power (CSP) into Hydrogen and Nitrogen and the above process can be repeated. The same system can also be used to split commercial Ammonia into Hydrogen and Nitrogen. The resulting Hydrogen can be separated and stored under pressure. This Hydrogen can be used to fuel Fuel cell cars such as Honda FXC or to generate small scale power for homes and offices. By using CSP, there is potential of cost savings as much as 70% compared to PV solar system for the same capacity power generation on a larger scale. Focusing sun’s energy using large diameter parabolic troughs and concentrators, one can generate high temperatures. Dishes can typically vary in size and configuration from a small diameter of perhaps 1 meter to much larger structures of a dozen or more meters in diameter. Point focus dish concentrators are mounted on tracking systems that track the sun in two axes, directly pointing at the sun, and the receiver is attached to the dish at the focal point so that as the dish moves, the receiver moves with it. These point focus systems can generate high temperatures exceeding 800ºC and even 1,800ºC. The temperature required to run a steam turbine does not exceed 290C and it is quite possible to store thermal energy using mixture of molten salts with high Eutectic points and use them to generate steam. Such large scale energy storage using lead-acid batteries and power generation using PV solar may not be economical. But it will be economical and technically feasible to harness solar thermal energy using CSP for large scale base load power generation. It is estimated that the cost of such CSP will compete with traditional power generation using coal or oil in the near future.CSP has potential to generate cost effective clean power as well as a fuel for transportation.
Posted by Clean Energy and Water Technologies at 3:58 PM 2 comments:

How to generate Hydrogen from your tap water?

Hydrogen is the cleanest source of energy that can power your homes and fuel your cars. It can potentially substitute diesel and petrol or coal and clean up our environment. Hydrogen has been manufactured industrially for the past several decades and transported across thousand of kilometers by pipelines in Europe. The science and technology of Hydrogen is well known but its application to generate power and fuel a car is relatively new. The gasoline internal combustion engines that drive our gasoline cars can be modified to suit Hydrogen fuel. But the physical and chemical properties of Hydrogen gas created a necessity to alter existing gasoline engines for commercialization. But such conversion has been painfully slow for couple of reasons. There is a stiff resistance from gasoline cars to switch over to Hydrogen because they have a well established infrastructure to manufacture gasoline cars and to supply gasoline through well established distribution network. But Hydrogen cars lack both of them. Even if the cars can be modified for Hydrogen, there are no sales or distribution network for the fuel Hydrogen, similar to Gasoline. Even consumers need to be educated that Hydrogen is safe, environmentally friendly and we need not depend on import of oil and so on. It is a blessing in disguise that Hydrogen can be generated by individual homes, business and industries for their captive use from their tap water. Recently Hydrogen fuelled scooters have been introduced in the market. There are number of advertisements in the media too; that you can fit a Hydrogen generator at your car that will reduce your gasoline bills substantially and also reduce your emissions.But these Electrolyzers can generate only water gas and not a pure Hydrogen. Yet such simple devices can help reduce your petrol bills to an extend .If things are so simple why are we still struggling with high crude oil prices and increasing electricity bills? Let us examine this in detail. Water (H2O) can be split into Hydrogen (H2) and Oxygen (O2) by simply passing an electric current through water using a battery. The water disassociates as follows: 2H2O ------------- 2H2 + O2 Stochiometrically, it means 36 lits of water will generate 4 Kgs of Hydrogen and 32 kgs of Oygygen.The current PEM (Proton exchange membrane) Fuel cell car (Honda FCX clarity) can drive 100 miles with just 0.105 kgs of Hydrogen from 5000 psi Hydrogen tank. Similarly 4kgs of hydrogen can generate about 100 kws of electricity using PEM Fuel cell, based on a conservative estimate; but 4Kgs of gasoline can generate only 15 kW electricity. The gasoline engine offers only 100km mileage from 13 kgs (16lits) of gasoline. In other words, 0.105 kgs of Hydrogen at 5000 psi gives the same mileage as 16 lits of Gasoline. This is the amazing power of water, yet to be unleashed! The tap water is suitable to generate Hydrogen by adding a little amount of potash lye to improve the electrical conductivity. An Alkaline water electrolyzer can be attached to the water tank to generate required amount of Hydrogen based on the above calculation. The resulting Hydrogen has to be compressed to a required level. The power consumption to electrolyze water will be about 75-80 kwhrs per Kg of Hydrogen generated at 5000 psi.Therefore 4Kgs of Hydrogen will require a power of 300kwhrs costing about $30 for a total mileage of 3800 miles. You will require a small reverse osmosis unit to be attached to your water tap so that the water is de-ionized so that there is no precipitation in the Electrolyzer or reduction in the efficiency of electrolysis. Recently, Suzuki Bargeman introduced Hydrogen Fuel cell scooter which claims to offer a mileage of 200km from 12 lits Hydrogen (carbon composite material) tank at an elevated pressure of 10,000psi.The future of Hydrogen car is very promising and finally the world can hope to get rid of smoke and noise from our roads and cities. 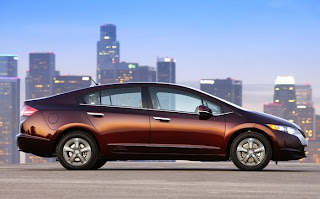 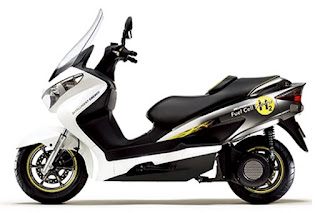 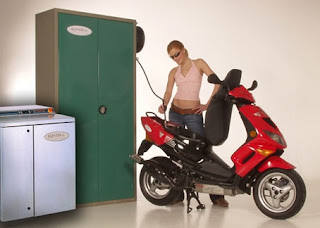 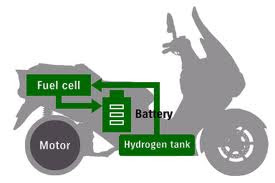 Posted by Clean Energy and Water Technologies at 10:04 PM No comments: