Which car Hydrogen, Fuel cell or Electric that will win the race?

Automobile industry has come a long way since the time of Henry Ford. The internal combustion engine that drives the modern car is slowly but steadily evolving into an emission free engine. The carbon pollution has caused globe to warm and changed the climate and also caused respiratory illness for millions of people around the world for decades. The Carbon pollution was completely ignored in the past while other design features of the car have undergone massive changes. However, when the smog and deteriorating air quality of Delhi and Beijing was beamed around the world in our TV sets, people realized how vulnerable they are to carbon pollution. But how to eliminate the Carbon emission from our automobiles? 1.The simple answer is to substitute the fossil fuels we use every day such as Petrol and Diesel with Carbon free fuel such as Hydrogen. Hydrogen being a light gas it has to be compressed and liquefied so that it can occupy less space. However, it requires a special ‘cryogenic tank’ to store liquid Hydrogen at – 253 C. BMW has already produced a commercial vehicle and it is in the market. However, the Hydrogen dispensing stations are limited in numbers. It uses existing internal combustion engine suitably modified for Hydrogen fuel so that they can use existing infrastructure that produces their petrol engines. There is no carbon emission except for water vapour. However, Hydrogen should be generated using renewable energy sources such as solar or wind. Hydrogen generated by reformation of natural gas will still have a Carbon foot print. It can be classified as a Carbon free car depending upon how Hydrogen is generated. However, producing liquid hydrogen or filling in a cryogenic tank is not commercially feasible for individual household. Hydrogen supply will have to be a centralized filling station. BMW has recently focussing their attention towards Fuel cell car. While those early vehicles were fun to drive, they suffered from the inefficiencies of super-cooling the liquefied hydrogen, and the hydrogen vaporizing in storage. Around the turn of the century, BMW began to research the hydrogen-powered, fuel-cell electric vehicle as an alternative to the hydrogen-powered combustion engine. 2.The other alternative is to substitute fossil fuel with compressed Hydrogen that generates an electric power using Fuel cell that drives the motor and the car. Here both fossil fuel and internal combustion engine are substituted with Hydrogen fuel and Fuel cell. This is a marked deviation from a conventional car. Honda of Japan was the first to introduce a commercial car using a Fuel cell. It uses compressed Hydrogen at 70 Mpa pressure that supplies Hydrogen to PEM (proton exchange membrane) Fuel cell that generates power that drives the motor and the car. There is no emission except for water vapour. The car runs smoothly and silently because there is no mechanical engine or moving part. It is truly a Carbon free car if the Hydrogen is generated from a renewable energy source such as solar or wind. It is ideal for houses with roof top solar panels. However, one has to install a water purifier, an electrolyser, a compressor and a compressed tank for Hydrogen storage. If the Hydrogen is generated by steam reforming of Natural gas, then it will have a Carbon footprint and cannot be classified as carbon free car. Generation of Hydrogen using roof top solar panel, electrolysis and compression is possible by individual households but it involves still some risk due to the explosive nature of Hydrogen. A centralized Hydrogen dispensing is still a safer method. Toyota Mirai Fuel cell car is a new model introduced by Toyota motor Co of Japan. It too has certain additional features such as a power generator for a remote households or camps. 2.The third alternative is to eliminate fuel as well as the engine completely; instead supply power to the motor from a storage battery. Here there is no emission or noise because there is no engine or moving parts similar to Fuel cell car. However, the battery is heavy and occupies a large space and it requires frequent charging from an external power source. The power often comes from the main power grid which carries the power generated from a power station which invariably uses fossil fuel. Though there is no Carbon emission from the electric car it still has Carbon footprint. However, if the power is generated from a renewable energy source such as solar and wind then it can be classified as Carbon free car. It is ideal for houses with roof top solar panels. However, it should be connected to the power grid in parallel. Alternatively, it can be connected to a storage battery if there is no grid. The Lithium ion battery pack in Tesla Roadster weighs 990 pounds, stores 56 kWh of electric energy, and delivers up to 215 kW of electric power. Tesla battery packs have the highest energy density in the industry. To achieve this energy density, Tesla starts with thousands of best-in-class Lithium-ion cells and assembles them into a liquid-cooled battery pack, wrapped in a strong metal enclosure. The battery is optimized for performance, safety, longevity, and cost. The cells used in a Roadster employ an ideal chemistry for electric vehicles Nickel Metal Hydride (NiMH) batteries are commonly used in hybrid cars. However, a 56 kWh NiMH battery pack would weigh over twice as much as the Roadster battery. Instead, Tesla uses Li-ion battery cells which dramatically decrease the weight of the Roadster pack and improve acceleration, handling, and range. 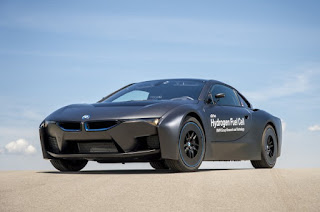 With Lithium-ion chemistry, there is no need to drain the battery before recharging - there is no “memory effect”. Roadster owners simply "top-off" each night.However long term supply of Lithium is still an issue. Each of the above cars have their own advantages and disadvantages. However, Fuel cell cars have certain advantages over Electric cars in spite of the advancement in battery technology primarily due to the weight of the battery and frequency and time required to charge the battery. Fuel cell car has a capacity to store Hydrogen fuel as well as to generate power onsite and this advantage will go a long way to make fuel cell cars truly carbon free not only for transportation but also for stationery power generation in remote locations. A large scale deployment of renewable energy generation such as solar and wind around the world can deliver a Car that is truly carbon free. However fossil fuel power generation will continue for years to come as the new technologies are developed to generate power using fossil fuel without emitting Carbon emission such as Carbon recycling. The real winner of the car race will depend upon how a Carbon emission free power generation technology will emerge in the future. Whatever may the power technology Fuel cell will be here to stay and if a cheap alternative catalyst is developed for Fuel cell then the race will be well and truly on. (Ref : Honda, Toyota and Roadster websites)
Posted by Clean Energy and Water Technologies at 7:26 PM 5 comments: