Air conditioning makes up bulk of the power usage especially in tropical countries where the sun is shining almost throughout the year and the humidity levels are high. It makes a perfect sense to use solar heat to cool homes, business and factories. Many air-conditioning systems are commercially available using simple roof top PV solar panels to generate electric power to run an electric window air-conditioners. This system uses commercially available solar panels and window air-conditioners and uses solar power to generate electricity to run the compressor and the blower in the air-con unit. This system requires large storage battery to store adequate electricity to run your air-conditioners for specified period of time. Otherwise it requires a large area of solar panels to meet the demand. The efficiency of such systems can be improved using DC operated compressors and fans. However, renewable energy such as solar is still expensive to run air-conditioners because of high initial investment cost, though it may be economical in the long run as the cost of solar panels and accessories slowly come down over a period of time. Moreover such systems are limited to small air condition capacities. For large air-conditioning requirements such as business and factories, we require a system that uses solar heat directly to air-condition the premises with higher efficiency and thermal storage capabilities. Designing such a system is not very difficult because most of the components necessary to install such a systems are readily available. One can install an air-conditioning system based on 100% solar thermal heat with molten salt thermal storage. Alternatively, a hybrid system can be installed based on solar heat without a thermal storage but using city gas supply. Many countries use gas for heating during winter seasons but do not use gas during summer. These countries can use a hybrid (solar-gas) system to air-condition their premises and avoid peak electric usage during summer seasons thereby avoiding electrical black-outs. The advantage with such system is they can also be used for heating the premises during winter season. With changing climate due to global warming many warm countries like India also experiences cold temperatures during winter season. For example New Delhi in India has experienced a sharp drop in temperature up to 15-20c during winter from earlier winters. Solar cooling systems to date have used waste heat gas absorption chiller heaters, which utilize the waste heat from co- 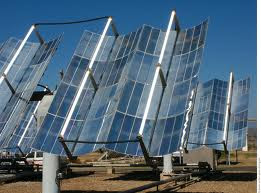 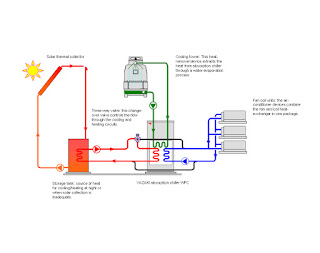 generation systems (CGS) for the cold water. However, these chiller heaters with their established technologies are devices designed for the effective use of stable CGS high-temperature waste heat, so they cannot accommodate the preferential use of solar heat when solar hot water temperatures suddenly change from large variations in the heat collector temperatures due to changes in the weather. The new solar absorption chiller heaters are now specially designed for the effective use of low-temperature solar heat to address this problem and improve the energy conservation effect from solar cooling system. Hot water at less than 90C can be used for such systems and typical chillers with their rated specification are shown in the figures. The efficiency of the system can be vastly improved by using parabolic solar concentrators, up to 27 times higher than ordinary flat plate solar collectors resulting in conversion efficiency up to 85% in heating and cooling. By selecting a natural refrigerant such as R717 we can save the environment from ozone depletion. Such systems offers flexibility to use exhaust heat, natural gas along with solar thermal storage up to 220C (phase transition temperature).The system offers an attractive return on investment, electricity savings and Carbon pollution reduction. The system can be designed from 5TR up to 200TR refrigeration capacity for 100% solar and up to 1000TR for a solar-gas hybrid systems. The solar thermal system with molten salt storage is versatile in its application because the same system can be designed for heating or cooling or on-site power generation for continuous applications. .
Posted by Clean Energy and Water Technologies at 12:01 AM

The idea is good if it is run successfully. Then air conditioner installation cost can be under the budget.

Solar heat amazing to utilize it but number of people likes to run by electrical air conditioner. Air conditioner maintenance is an extra burden for consumer.

Hi, thank you for the blog I have learned many things from this blog and it helps me to know more about air conditioner please share this type of blogs regularly.Freon gas suppliers in uae

This is on the grounds that in many pieces of the world, the duties that are charged are around 30% less when contrasted with utilizing different wellsprings of vitality. Zonnepanelen in 2019

This is my first visit to your web journal! We are a group of volunteers and new activities in the same specialty. Website gave us helpful data to work. Zonnepanelen

I was reading some of your content on this website and I conceive this internet site is really informative ! Keep on putting up. Zonnepanelen kopen

Nice post! This is a very nice blog that I will definitively come back to more times this year! Thanks for informative post. Installateur zonnepanelen

I wanted to thank you for this excellent read!! I definitely loved every little bit of it. I have you bookmarked your site to check out the new stuff you post. Zonnepanelen kopen

This one is good. keep up the good work!.. Zonnepanelen

Nice blog and absolutely outstanding. You can do something much better but i still say this perfect.Keep trying for the best. Zonnepanelen

Yes i am totally agreed with this article and i just want say that this article is very nice and very informative article.I will make sure to be reading your blog more. You made a good point but I can't help but wonder, what about the other side? !!!!!!Thanks Erotische massage

Wow! Such an amazing and helpful post this is. I really really love it. It's so good and so awesome. I am just amazed. I hope that you continue to do your work like this in the future also Warmtepomp

I read your blog and found the effective .Thanks for sharing fantastic blog! https://lajollahvaccontractorsassociation.webnode.com/

Positive site, where did u come up with the information on this posting?I have read a few of the articles on your website now, and I really like your style. Thanks a million and please keep up the effective work. Zonnepanelen

Thank you, much appreciated.

Really impressive post. I read it whole and going to share it with my social circules. I enjoyed your article and planning to rewrite it on my own blog. Airco

As a seller of legal steroids, you can buy Crazy Bulk products, explore stacks and finally get the body you’ve always wanted Zonnepanelen installateur

The existence cycle of a battery is the thing that decides its appropriateness for use with solar cells. Zonnepanelen

Really nice and interesting post. I was looking for this kind of information and enjoyed reading this one. Keep posting. Thanks for sharing. Zonnepanelen

It's late finding this act. At least, it's a thing to be familiar with that there are such events exist. I agree with your Blog and I will be back to inspect it more in the future so please keep up your act. Zonnepanelen kopen

I see the greatest contents on your blog and I extremely love reading them. Installateur zonnepanelen

I like your post. It is good to see you verbalize from the heart and clarity on this important subject can be easily observed... ChoreRelief

Excellent blog! I found it while surfing around on Google. Content of this page is unique as well as well researched. Appreciate it. Reformas integrales en elche

In the event that you can't purchase all the solar boards on the double, you can begin with littler ventures, and when you have the cash, you can introduce some more boards.איך עובד גנרטור

Thanks for taking the time to discuss that, I feel strongly about this and so really like getting to know more on this kind of field. Do you mind updating your blog post with additional insight? It should be really useful for all of us. flexible solar panel

When your website or blog goes live for the first time, it is exciting. That is until you realize no one but you and your. gardening equipment

Thanks for nice and informative post. I got numerous point from your blog. Interharex.com.au is one of the best Engineering Companies. For the more details you can visit on consulting engineers Sydney

The facts demonstrate that you won't require the same number of panels to arrive at a general yield of around 1 to 3 kw for this situation, however the issue is that the more monocrystalline solar panels you purchase, the more noteworthy the value distinction becomes. Zonnepanelen kopen

Great knowledge, do anyone mind merely reference back to it Las Vegas

Thank you for some other informative blog. Where else could I get that type of information written in such an ideal means? I have a mission that I’m just now working on, and I have been at the look out for such information. anti gravity chair cup holder

Extraordinary things you've generally imparted to us. Simply continue written work this sort of posts.The time which was squandered in going for educational cost now it can be utilized for studies.Thanks Aegean College

I recently came across your blog and have been reading along. we provide lpg price comparison UK at affordable prices. for more info visit our website.