It is time UN acted on climate change

Carbon emission caused by human beings has become a major issue for our environment and future economy due to changing climate. But there are still few countries who are sceptical about the science of climate change and reluctant to act and refuse to be a part of United Nation’s action on climate change. These countries are either fossil fuel producers such as coal, oil and gas or large economies who have been traditionally depending on usage of fossil fuel for their economy and security. The transition from Carbon economy to non-Carbon economy may not be easier for them in the absence of an alternative technology that can guarantee not only complete elimination of CO2 emission but also efficiency and sustainability. There is a strong political motivation too behind such dithering and they create a fear of slowing economy and large-scale unemployment among the people in the absence of a viable alternative energy source. Therefore, United Nation has an important role to play at this critical juncture of transition to non-carbon economy and save the planet earth from imminent danger of environmental and economic collapse. UN can also stop mass extinction of species and migration of refugees for a better life. UN was successfully able to bring together 174 countries to the negotiating table during Paris climate change conference. However, they failed to reach a unanimous Agreement and announce a concrete action plan to act. They failed to articulate the ways and means of reducing or eliminating man made CO2 emissions in a stipulated time frame. They also failed to bring powerful nations such as USA to the table which made the task even harder. But this situation can be changed if UN is able to articulate a concrete Action plan which is agreeable to all the parties involved. This is possible only if UN can address all the issues involved such as the alternative technology, funding, implementing in a stipulated time frame, measuring and monitoring the progress and achieving the final goal. UN should first be able to create the same level playing field where all Countries can take part equally without any discrimination. It depends completely on focussing the type of technologies to be deployed to achieve the above goals and It should be able to set a specific date to implement such a plan. Currently renewable energy is considered as one of the alternatives along with renewable Hydrogen which can act both as an energy storage and as well as energy carrier. But renewable Energy is intermittent and energy storage has become part of the system. With our limited experience in renewable energy deployment over a decade renewable energy alone Cannot be the solution to address the issue of CO2 emissions. One must estimate the life cycle CO2 emissions of hardware used in renewable energy systems such as PV solar panels, Solar concentrators, wind turbines, storage batteries. Renewable Hydrogen generators, Fuel cells etc. Each of them has their own Carbon footprint that must be incorporated in life cycle assessment. Similarly, even fossil fuel-based power generators such as boilers, steam or gas turbines, pumps and compressors etc too have Carbon footprint that should be assessed. Carbon footprint should be assessed as fixed carbon footprint and variable carbon footprint and then these data should be used to arrive at the Carbon footprint to generate power (tons of CO2/Mwh) Once a life cycle assessment of their Carbon footprint is estimated then it will be easier to rate each technology based on their “Carbon Rating” which will be a measure of their Carbon footprint. The Carbon rating is measured and allocated “number of stars” based on Carbon footprints. Lowest emitting technology will be rated with highest number of stars while highest emitting technologies will get the lowest number of stars. Carbon rating will be a good measure to assess the technology that can be used worldwide. Countries who are reluctant to reduce CO2 emissions will be discouraged to participate in government and private tenders worldwide and exports. Such countries will be treated as “Pariahs” and rejected by consumers due to their low Carbon rating. Technologically advanced countries or companies who can use fossil fuel but with lowest or Zero CO2 emissions will also be able to compete with renewable energy technologies. Carbon Rating will offer everybody the same level playing field. Carbon is the fundamental building block of organic life on earth which is essential for human survival but unabated CO2 emission by human activities is the culprit. I strongly believe Zero Carbon emission can be achieved even while using fossil fuels by constantly recycling CO2 in the form of regenerated synthetic natural gas. It will not only eliminate CO2 emission but also generate synthetic fuel using renewable Hydrogen without any necessity to exploit fresh fossil fuels. Using renewable Hydrogen as a storage medium or as energy carrier may be expensive due to inherent nature of Hydrogen atom. UN can introduce Carbon Rating as a single tool to measure the Carbon footprint of a specific technology with the lowest or Zero CO2 emission worldwide to start with. They should be more proactive in promoting technologies with highest Carbon rating and encourage countries to adopt such measures. 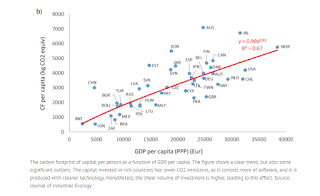 Posted by Clean Energy and Water Technologies at 6:36 PM

These articles have got complete sense without confusing the readers. credit counseling

I consider this the finest blog I have read all this hour. pure CBD oil for sale

I would be pleased if all WebPages provided such articles. read manga