“The method adopted in Vedanta to impart the knowledge of Brahman is known as the method of superimposition (adhyaaropa) and subsequent negation (apavaada). In the Bhashya, Bhagavatpada says, “The transmigrating self is indeed Brahman. He who knows the self as Brahman which is beyond fear becomes Brahman. This is the purport of the whole Upanishad put in a nutshell. It is to bring out this purport that the ideas of creation, maintenance and dissolution of the universe, as well as the ideas of action, its factors and results were superimposed on the Self. Then, by the negation of the superimposed attributes the true nature of Brahman as free from all attributes has been brought out. This is the method of adhyaaropa and apavaada, superimposition and negation, which is adopted by Vedanta.” (Ref: What are Upanishads? : An over view by S.N. Sastri on Luthur.com) The analogy that is often used to describe the process of superimposition and negation is that of ‘using a thorn to remove a thorn’. Finally, when the last thorn is removed, the thorn used to remove it is thrown away as well. Similarly, Carbon can be used to reduce carbon emission while power is generated! Let us consider the issues of Carbon emission and global warming resulting in climate change in the above context. Recent conference in Climate change held in Paris is acclaimed to be a success to the planet earth collectively adopted by 195 countries both developed and developing. In a nutshell they all have agreed to reduce their carbon emissions to limit the global warming to less than 2C or even 1.5 between 2030 and 2050. Is it really practical to achieve the above target given the nature of reduction and the complexity of imposing such a reduction within the time frame? It is a big question mark. The only practical method to reduce CO2 is by using Hydrogen CO2 + H2----> CO + H2O and then convert CO into a useful product such as Urea NH2CONH2 a fertilizer. Production of Urea requires additional Hydrogen which is again obtained by combustion of fossil fuel resulting in CO2 emission. Moreover, CO2 will eventually be released at the point of usage of urea later. While trying to reduce Carbon emission one will end up with more Carbon emission in the atmosphere. 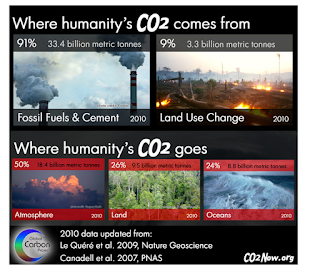 The carbon emission from power plants can be substituted with renewable energy sources such as wind and solar at a very high cost but how the emissions from chemical plants such as urea or from automobile emissions, steel plants and cement plants be contained? We should also remember that silicon wafer to produce solar panels consume large amount of power which now comes invariably from fossil fuels. There is a long list of such plants emitting Carbon every day from all over the world. But there is a possibility to reduce emissions substantially by converting CO2 emissions from power plants into a synthetic fuel which can then substitute fossil fuel to continue power generation. The CO2 resulting from combustion of synthetic fuel will be recycled in the same manner mentioned above thus completing a cycle. To convert CO2 into a synthetic fuel we will require Hydrogen either by renewable sources or non-renewable sources. The non-renewable sources for Hydrogen cannot be a long term solution but renewable Hydrogen is very expensive at this stage. Therefore, Hydrogen is the only source which will not only help reduce Carbon emissions but also help eliminate Carbon completely from planet earth. Renewable Hydrogen is the key to decarbonize the planet earth. However, it may be possible to decarbonize the planet temporarily by using Hydrogen derived from fossil fuel without emitting CO2! It is not just a theory but practical because the technology has already been tested! In this process the Carbon will remain in the loop where it will neither be buried nor emitted into the atmosphere but constantly recycled. 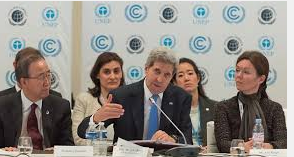 Posted by Clean Energy and Water Technologies at 6:53 PM