Solar thermal- a cool solution for a warming planet 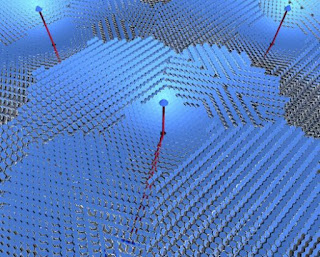 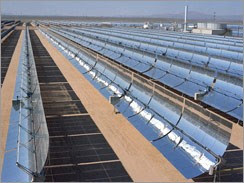 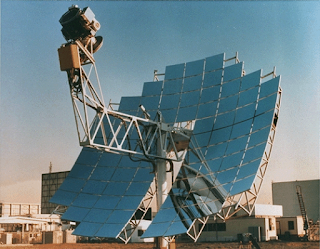 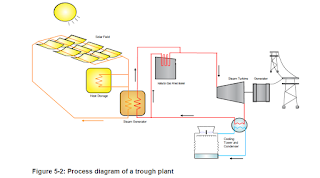 Posted by Clean Energy and Water Technologies at 2:58 PM 11 comments:

All existing power generation technologies including nuclear power plants uses heat generation as a starting point. The heat is used to generate steam which acts as a motive force to run an alternator to produces electricity. We combust fossil fuels such as coal oil and gas to generate above heat which also emits greenhouse gases such as oxides of Carbon and Nitrogen. As I have disused in my previous article, we did not develop a technology to generate heat without combusting a fossil fuel earlier. This was due to cheap and easy availability of fossil fuel. The potential danger of emitting greenhouse gases into the atmosphere was not realized until recently when scientists pointed out the consequences of carbon build up in the atmosphere. The growth of population and industries around the world pushed the demand for fossil fuels over a period of time which enhanced the Carbon build up in the atmosphere. But now Concentrated Solar Power (CSP) systems have been developed to capture the heat of the sun more efficiently and the potential temperature of solar thermal can reach up to 550C. This dramatic improvement is the efficiency of solar thermal has opened up new avenues of power generation as well as other applications. “CSP is being widely commercialized and the CSP market has seen about 740 MW of generating capacity added between 2007 and the end of 2010. More than half of this (about 478 MW) was installed during 2010, bringing the global total to 1095 MW. Spain added 400 MW in 2010, taking the global lead with a total of 632 MW, while the US ended the year with 509 MW after adding 78 MW, including two fossil–CSP hybrid plants”. (Ref: Wikipedia) “CSP growth is expected to continue at a fast pace. As of April 2011, another 946 MW of capacity was under construction in Spain with total new capacity of 1,789 MW expected to be in operation by the end of 2013. A further 1.5 GW of parabolic-trough and power-tower plants were under construction in the US, and contracts signed for at least another 6.2 GW. Interest is also notable in North Africa and the Middle East, as well as India and China. The global market has been dominated by parabolic-trough plants, which account for 90 percent of CSP plants. As of 9 September 2009, the cost of building a CSP station was typically about US$2.50 to $4 per watt while the fuel (the sun's radiation) is free. Thus a 250 MW CSP station would have cost $600–1000 million to build. That works out to $0.12 to $0.18/kwt. New CSP stations may be economically competitive with fossil fuels. Nathaniel Bullard,” a solar analyst at Bloomberg “New Energy Finance, has calculated that the cost of electricity at the Ivanpah Solar Power Facility, a project under construction in Southern California, will be lower than that from photovoltaic power and about the same as that from natural gas However, in November 2011, Google announced that they would not invest further in CSP projects due to the rapid price decline of photovoltaics. Google spent $168 million on Bright Source IRENA has published on June 2012 a series of studies titled: "Renewable Energy Cost Analysis". The CSP study shows the cost of both building and operation of CSP plants. Costs are expected to decrease, but there are insufficient installations to clearly establish the learning curve. As of March 2012, there was 1.9 GW of CSP installed, with 1.8 GW of that being parabolic trough” Ref: Wikiedia. One Canadian company has demonstrated to generate Hydrogen from water using a catalytic thermolysis using sun’s high temepertaure.The same company has also demonstrated generating base load power using conventional steam turbine by CSP using parabolic troughs. They store sun’s thermal energy using a proprietary thermic fluid and use them during night times to generate continuous power. The company offers to set up CSP plants of various capacities from 15Mw up to 500Mw.
Posted by Clean Energy and Water Technologies at 9:08 PM No comments:

Solar thermal for base load power

The city of Athens hosted its oldest tradition of lighting the Olympic torch for the 2012 London Olympic Games on Thursday in Olympia. The torch was lit by solar power; using parabolic mirror to redirect the sun’s light in order to light the flame with purest natural light. The thermal energy of sun’s light can be powerful when focused to a point and it can reach a temperature more than 600C.The parabolic trough with reflective mirror focuses the sunlight on the tube called ‘collectors’ in which a fluid with high boiling point is circulated. The hot fluid in turn is used to convert water into steam in boiler. The hot oil transfers its heat to the water in a heat exchanger and returns back to the parabolic trough. It is a closed circuit system. The hot oil at 390C generates steam at 370C at 100 bar pressure, which is used to run a HP steam turbine. The standard steam condensing cycle generates power similar to fossil fuel fired power plant. A 50 Mw Trough plant in Israel (Negev Desert) is already in operation. The capacity of such plant can be easily expanded by adding modular parabolic troughs and collectors and the plant can be designed to meet specific power demands. This is a straight forward method to generate base load power using standard steam cycle. The efficiency of such system will be 41% maxium.However recently few companies are trying use a combined cycle. This increases the solar to heat efficiency from 50.5% to 53.6%.This nominal 50Mw power plant generates a total peak power of 57.10Mw using a solar collection area of 310,028m2 with annual solar to electrical efficiency at 16.3% using a water cooled condenser in the steam cycle. The cost of energy works out to $0.23 to $ 0.25 /kwhrs. By using a central solar collection tower (Heliostat) and bottoming with Rankin/kalina cycle ,it is estimated that the total installed cost can be reduced by 10%.The system can be configured from 2Mw up to 100Mw using both trough and tower system. The system can be installed in any remote, arid locations using air condensers, where cooling water is a problem. The estimated annual specific energy cost is less than 6 cents/kwhrs, comparable to low cost fossil energy but with zero pollution and with zero carbon emission. Solar thermal is a potential clean energy of the future for many countries around the world with yearlong sunshine with good intensisty.The solar thermal energy can also be used in many process industries where thermal heating is required. Solar salt pans can use solar thermal energy very efficiently to reduce their production cycle. The concentrated brine can be used as a circulation fluid in solar collectors and also be used to generate power using low heat technologies like Kalina cycle, because concentrated salt brine can store thermal heat. Gemasolar power in Spain is a base load power station supplying power for 25,000 homes 24x7 using molten salt (60% KNO3+40% NaNO3) as a thermal storage medium instead of batteries. Nine plants were built in 1980 in Mojave Desert with a combined capacity of 354 Mws. Other examples of solar base load power plants are Blythe solar with capacity of 968Mw at Riverside County, California and Ivanpah power station with capacity of 370 Mw capacities in US,both under construction. Large scale solar base load plants are no longer a theory but a commercial reality. Direct solar lighting is also being introduced using fiber optics. The sun light is collected at a central point and directed through fiber optics to various rooms inside the building supplying direct sun light. This saves not only electricity but also provides natural light to work places because human body requires certain amount of UV light exposure. Solar energy is here to stay and offer various clean energy solutions in the future.
Posted by Clean Energy and Water Technologies at 4:54 PM 1 comment: